What’s the Cost to Bramptonians When the Media Does Not Represent Them? 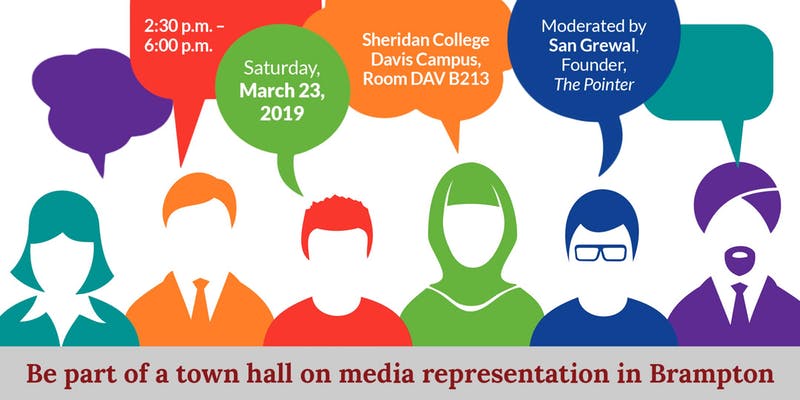 A town hall with immigrant journalists, citizens and publishers

OTTAWA, ON (March 11, 2019) – There is a crisis of trust in media organizations as readers, listeners and viewers do not see themselves reflected in the stories that are told about them. New Canadian Media and Magazines Canada are hosting a town hall in Brampton, Ontario to discuss how journalism can better represent the diversity found among Canadians.

With a high immigrant population, Brampton is a perfect example of the gaping “diversity deficit” in Canadian media. The event will foster a three-way dialogue with a diverse media audience from Brampton, journalists from immigrant backgrounds and local magazine publishers. San Grewal, founder and publisher of The Pointer, an independent media organization devoted to covering locally focused news in the Brampton area, will moderate the event.

“We want to place our audience at the center of this conversation and we want to home in on Brampton,” says New Canadian Media publisher George Abraham. “I’m so glad that we have the privilege of working with Magazines Canada on this ground-breaking initiative.”

Members of the New Canadian Media Collective will also participate in the event. The Collective is a group of high-calibre journalists who bring an ethnocultural perspective to their work. During the month of March, New Canadian Media is running a membership drive and invites anyone who is concerned about the diversity of media in Canada to join the Collective. Membership is open to individuals at all stages of their career including established journalists, new immigrants breaking into the Canadian media market or those just starting their careers in journalism.

The event will also provide networking and learning opportunities for Ontario magazine professionals on how they can better represent the diversity of Canadians and become more inclusive.

“Magazines Canada is really pleased to partner on this event with New Canadian Media,” says Melanie Rutledge, Executive Director of Magazines Canada. “Magazines are an important part of Canada’s cultural and economic fabric. As platforms for our very best journalists, writers and creators, magazines should reflect the diversity of the communities they serve.”

About New Canadian Media
NCM is a member-based, non-profit that exists to showcase immigrant journalism and amplify the work of journalists from various immigrant/ethnic backgrounds. Our content provides fresh insights into developments in politics and society, enhancing your understanding of our diverse world. Visit newcanadianmedia.ca.

About Magazines Canada
Magazines Canada is the national association representing the majority of Canadian-owned, Canadian-content consumer, cultural, specialty, professional and business magazines. French and English member titles cover a wide range of interests across multiple platforms, including arts and culture, business and professional, lifestyle and food, news and politics, sports and leisure, women and youth. The association focuses on government affairs, professional development, research, national marketing campaigns, and delivering services that meet the needs of the magazine industry. Visit magazinescanada.ca.