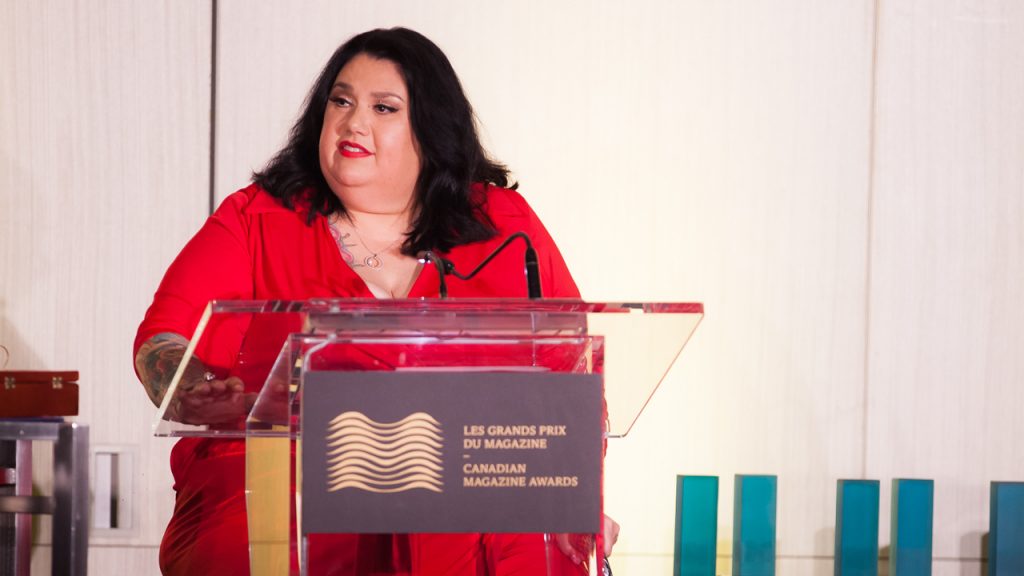 “The Stories That Inspire Us”

Continuing our look back at the inaugural Canadian Magazine Awards / Grands prix du magazine, we are very happy to share with you Candy Palmater’s opening remarks at the awards fête on April 27.

As a judge for the awards program in its first year, and an avowed magazine lover, Candy opened our celebration of Canadian magazine journalism and design with a heartfelt, personal story about the impact of magazines on her life.

We know we weren’t the only ones who got a little teary-eyed as Candy shared how magazines have inspired her throughout her life to dream, and how she feels seen by magazine content. It reminded us that magazine content, and the people who create it, matter to readers and to Canadians in a very real way.

“Magazines showed me beautiful glossy pictures of a life that might be and magazines presented to me points of view, and depth of thought, that I could not access in my little village. Magazines let me dream about the idea that maybe someday my thoughts would be important enough to share on the pages of magazines.

“Whether your magazine is fashion or thought, or art, or specific to an industry, understand that what you do when you go to work every day may be the singular lifeline to some Canadian kid, with a dream of setting the world on fire. That is the spark that you fanned in me and I have been enjoying chasing that dream ever since.”

We thank Candy Palmater for sharing her beautiful remarks with us. Watch her speech, and stay tuned for key dates for the 2018 awards.

Candy is a recovered lawyer turned feminist comic who was raised by bikers in the wilds of northern New Brunswick. She is a broadcaster, writer, international keynote speaker, film and TV producer, multiple-award-winning TV series The Candy Show creator, comedian, host extraordinaire and activist, and has executive-produced three films on Mi’kmaw culture.

We would also like to thank all of the sponsors who made these inaugural awards possible, particularly Reader’s Digest, Labatt, the Lowe-Martin Group, CDS Global, Manulife, Rogers, the Facebook Journalism Project and the CBC.

Visit maggrandsprix.ca/awards for a complete list of finalists, winners and judges for the 2017 awards.

As part of our commitment to transparency, we welcome feedback on how to improve the Magazine Grands Prix. Send us your thoughts. We appreciate any and all feedback: reaction@maggrandsprix.ca

A Look Back at the Inaugural Magazine Grands Prix