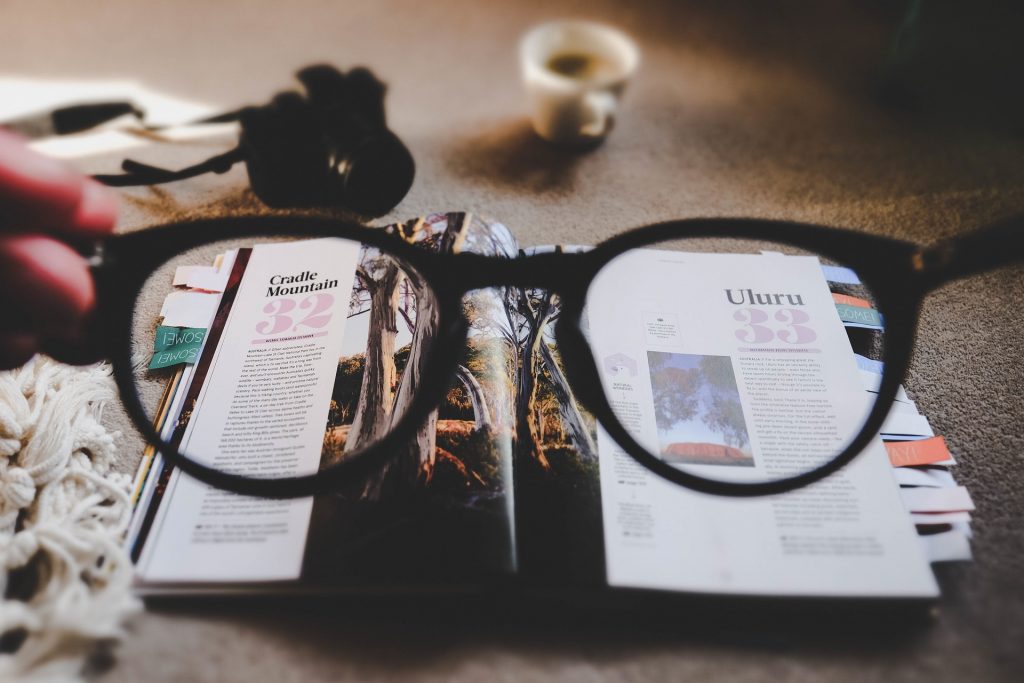 At Magazines Canada, one of the most valuable things we can do for our members is to keep our ear to the ground, so to speak, and bring you news and content that will move you, inspire you, and ultimately help you run your publishing operations. With this in mind, we are launching a new monthly blog curated and written by our talented Director of Communications, Brianne DiAngelo, called The Creative Post. Why should you read it? Because Brianne, a committed reader herself, scours the outstanding articles and stories regularly published by our members—and, admittedly, some titles we would love to have as members—and serves them up to you. Think of it as your monthly helping of exquisitely-curated content, assembled with care. We hope you like it! Please let us know what you think.

Welcome to the first installment of The Creative Post, a monthly blog from Magazines Canada’s communications director Brianne DiAngelo that shares magazine stories with staying power.

I’m kicking off the Creative Post with a selection of magazine articles, trends and visuals that have stayed at the top of my mind over the last few months.

The Walrus published this special web series on the opioid crisis at the end of August, and if it passed you by I absolutely recommend taking a look at it. Taken as a whole, it’s a compelling service package that does what magazines do best: it covers an issue that often invokes knee-jerk responses, and forces us to rethink prejudices. It does so through a combination of on-the-ground reporting, statistics and infographics, and personal narratives.

The personal stories are all very compelling—like Teva Harrison’s article about using fentanyl as part of her ongoing pain management program for cancer; four parents sharing how they started or joined advocacy efforts after their children died; a family physician in southern Alberta on the challenges of the crisis in small towns and reserves. The first story in the series, “My Life and Death on Opioids,” is beautiful and heart-breaking by turn in its insight into human behaviour.

Elamin Abdelmahmoud on the power of names

In 2018, Maclean’s launched a new series for its back page. For years this page had been the home of “The End,” a regular feature that told the story of the life and death of a “unique yet everyday person.” Now it is home to “Before You Go,” an essay series that collects heartfelt letters written by Canadians to special people in their lives.

You might have seen quotes from Elamin Abdelmahmoud’s letter to his baby daughter, “I wanted my last name to be a burden,” being shared over the summer. Believe the hype: It is so good, well worth your time to read in full. It’s a short piece, but it isn’t slight; it expands in the mind. Any time I spend here describing it is better spent with you reading it!

This article is a much longer read, but every bit as engaging. Published by the Literary Review of Canada, “Temporary spaces of joy and freedom” is an edited transcript of a wide-ranging conversation between Michi Saagiig Nishnaabeg writer, artist and scholar Leanne Betasamosake Simpson, and Dionne Brand, the poet, novelist and critic.

Simpson and Brand are so generous with their learnings and teachings. They cover a lot of ground as they talk about their own creative work and inspirations, art and organizing, Black and Indigenous narratives, colonialism past and present. When I finished reading, I felt grateful to them and to the LRC for sharing this conversation with us!

“The Personal Business of Being Laid Off“

In this essay for Hazlitt about being laid off from her dream job at a media company, Sarah Hagi speaks to her experience as a full-time employed writer, and then widens the lens to her experience in Canadian media as a Black Muslim woman.

I’ve re-read this piece a number of times. Every time, something new gets me—how Hagi describes the meaningfulness of work, its emotional reality. I love how she describes the amazing feeling of being part of a team doing something meaningful, and grappling with how that can happen in an environment that’s still hostile around who gets to speak, and whose voices are heard. Her writing is funny, sad and true.

The news that BuzzFeed News was “quietly testing” a membership program (in the words of Digiday) oddly seemed to create some furor as people mulled over a for-profit news organization asking users for donations. I say “oddly” because I’m not sure what about this story caught people’s attention—is it simply that it’s BuzzFeed asking for money?—but the trend in membership models is definitely interesting to look at, especially from a magazine perspective. A frequent comparison was The Guardian, which has been successful in doing just that; Digiday also notes that The New York Times, The Washington Post, The Atlantic and other media companies have recently launched digital subscriptions and memberships “to capitalize on people’s growing willingness to pay for quality news.”

Back in March, I was really lucky to see Bitch Media’s Kate Lesniak talk about membership models at the Alberta Magazines Conference. The companies listed above are all really big, and so it might seem like a membership program will only work at that level. By comparison, Bitch is a much smaller, independent media outlet—and their membership now drives the majority of their revenue.

In the article I’ve linked above, Kate talks about “the pivot to membership,” including the Membership Puzzle Project, which studies media organizations with a membership model, and why she believes membership programs are about to explode (this post was written in December 2017, by the way, so that prediction seems right on). You can also watch her AMC talk where she gives more detail on how Bitch launched their membership program (the B-Hive), how it fits with their company and their readers’ values, and how it’s helped their indie mag secure a more stable financial future. Really, really good stuff.

Here are a handful of magazine covers that I’ve eagerly pulled off our shelves: 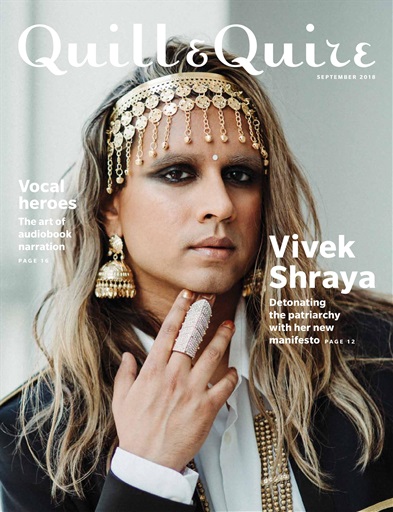 Given that Quill & Quire‘s portrait photography is always good, their September 2018 cover is an absolute standout. Featuring a gorgeous shot of author Vivek Shraya from photographer Arden Wray, this cover was an office fave for its composition and beauty. 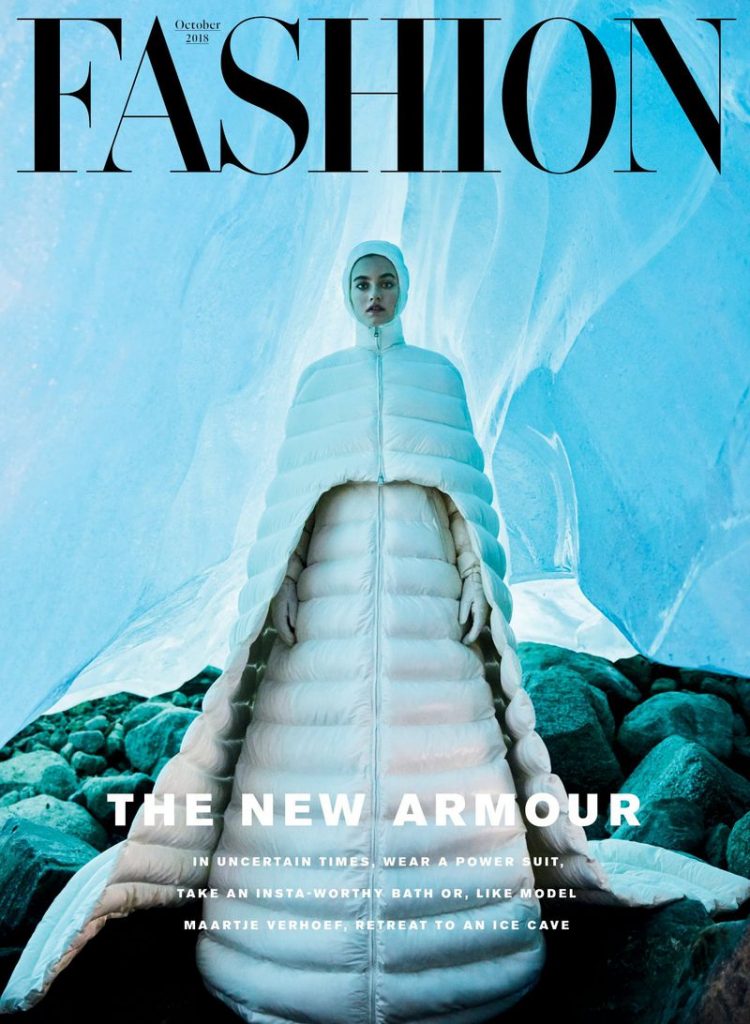 Opinion was more divided on the October 2018 cover from FASHION, but I really like it! The photograph is from an article about luxury brand Monocler, featuring their “puffer nun” cape worn on location in an ice cave near Whistler. 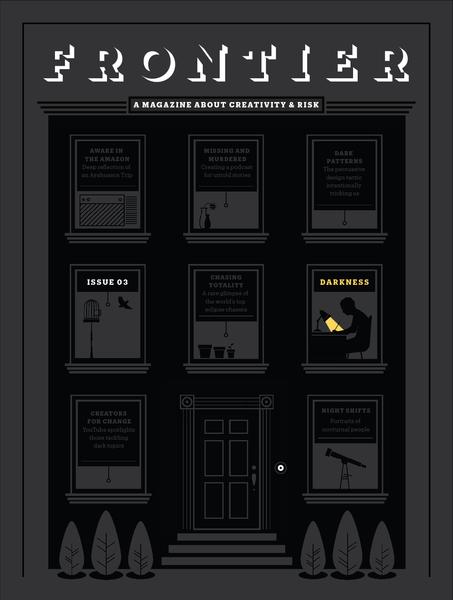 Now this cover is just all-around awesome: For their issue on darkness, Frontier magazine incorporated a custom OLED into Frank Chimero’s cover illustration. Press the doorbell, and the desk lamp turns on. Brilliant!

The Feathertale Review is another mag whose covers never disappoint, and this one, for their “unfinished issue,” is just lovely. Cover star D’Artagnan is re-imagined as a courtly monkey sprite by artist Jenna Pyle. 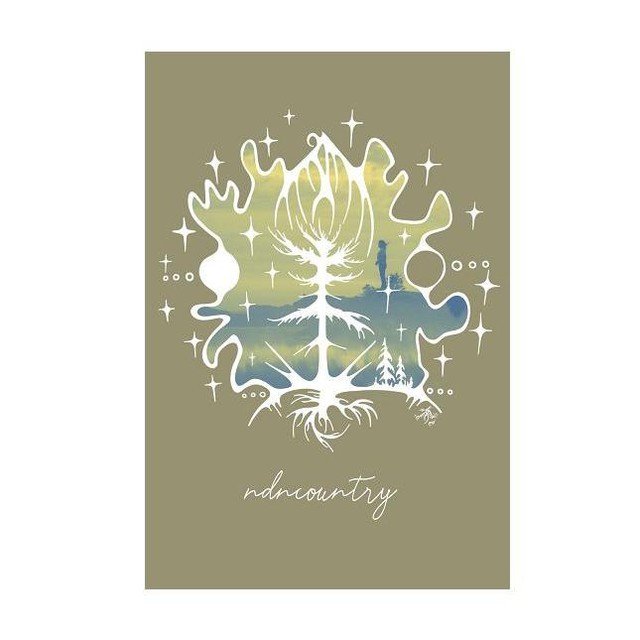 ndncountry is a new collaborative issue from CV2 and Prairie Fire, and the production values on the finished product are top-notch. In conceiving of ndncountry as a “territory of the imagination, profoundly rooted in the land and in the living energy of Indigenous languages,” co-editors Katherena Vermette and Warren Cariou have collected Indigenous stories, poems and nonfiction writing from across Canada. The cover combines artwork from Nyle Miigizi Johnston and photography from Melody Charlie. Definitely keep an eye out for ndncountry in stores and on newsstands!