We are very pleased to share an update on the recipient of the second annual Magazines Canada Fellowship, Will Pearson, who has accepted a contract position with his host magazine The United Church Observer as Associate Editor.

Every year, Magazines Canada Fellows have the opportunity to choose their host magazine from eligible expressions of interest. Pearson elected to work at The United Church Observer, an award-winning publication based in Toronto, Ontario that focuses on faith, justice and ethical living.

“I’m delighted my time as the 2018 Magazines Canada Fellow has led to an opportunity to continue working with The United Church Observer for another year,” said Will Pearson. “By providing me with a chance to learn new skills and build new relationships, the Fellowship has helped me to achieve a significant professional goal.” 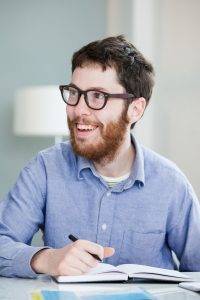 Since beginning his Fellowship at The United Church Observer in August, Pearson has worked with his host magazine mentors on editing feature stories, writing both short-form and long-form journalism, and contributing to editorial decision-making. His journalism work includes a cover story to be published in the upcoming December issue, as well as online stories like “New small-business projects aim to prove that ‘downtown is for everyone’.”

Pearson was announced as the second annual Magazines Canada Fellow in April 2018. He is a writer and audio producer currently based in Peterborough, Ontario, whose work has appeared in a number of Canadian magazines and on community radio stations. He is also the co-producer and co-host of the Peterborough Currents podcast.

Our judges were impressed by Will’s thoughtful, well-researched writing, which they said “is proof of great curiosity and diligence. His writing—and his podcasts—are infused with elegance and humanity.”

The Magazines Canada Fellowship seeks to develop the next generation of professionals working in Canadian magazine media. The Fellowship program was launched in 2016 to invest in the future of the magazine sector by supporting emerging journalists through a series of paid fellowships with Canadian magazines across the country. Fellows work on stories that explore the issues most important to Canadians, while receiving mentorship and guidance from a host magazine.