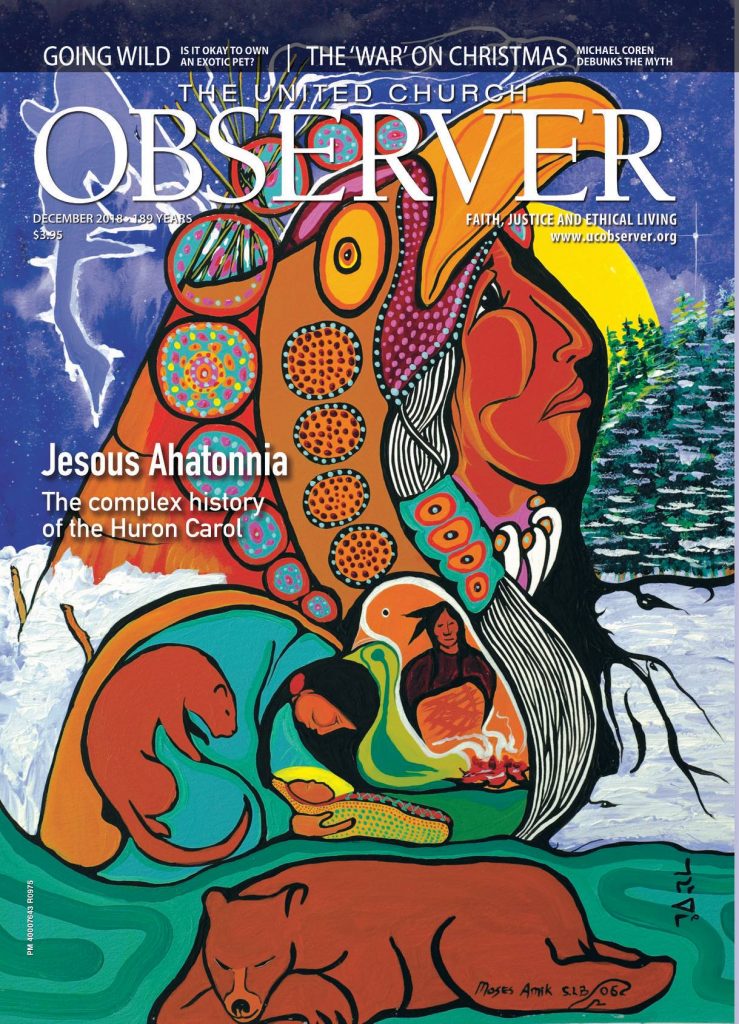 We are happy to share an update on the recipient of the second annual Magazines Canada Fellowship, Will Pearson.

During Pearson’s Fellowship with host magazine The United Church Observer, he researched and wrote a long-form article about the history and legacy of “Jesous Ahatonnia” (more commonly known as the “Huron Carol”), a Christmas carol originally written in the Wendat language.

The resulting article, “The complex history of the Huron Carol,” is the cover story for The United Church Observer‘s December 2018 issue, on newsstands now. 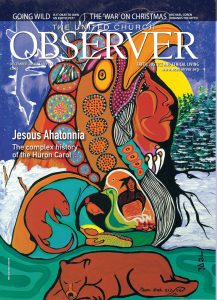 As Pearson explores in the article, “Jesous Ahatonnia” is often received as a part of Indigenous heritage but its meaning is complicated by the colonial context within which the song was written.

Pearson and The United Church Observer used funding available through the Magazines Canada Fellowship program to travel with a French translator to the Indigenous community of Wendake, Quebec to speak with present-day members of the Huron-Wendat First Nation about the history and significance of the song, which was originally written for the Wendat in the 17th century.

“Speaking with contemporary members of the Huron-Wendat First Nation about their views of the ‘Huron Carol’ was essential to telling this story,” said Pearson. “The special project funding available through the Fellowship made this possible by covering travel expenses to Wendake, Que., for a translator and me. With that extra support, I was able to research and write a story I wouldn’t have otherwise been able to.”

With a paid position at a host magazine, Magazines Canada Fellows like Will Pearson have the opportunity to work on stories that explore the issues most important to Canadians and which inform, engage and deepen the national conversation, while receiving mentorship, guidance and support for emerging talent within the magazine industry.

Pearson was announced as the second annual Magazines Canada Fellow in April 2018. He is a writer and audio producer currently based in Peterborough, Ontario, whose work has appeared in a number of Canadian magazines and on community radio stations. He is also the co-producer and co-host of the Peterborough Currents podcast.

As part of his Fellowship, Pearson also worked on editing feature stories, writing both short-form and long-form journalism, and contributing to editorial decision-making at The United Church Observer. He has since joined the Observer team as Associate Editor, a position he will hold until the end of 2019.

The Magazines Canada Fellowship develops and nurtures the next generation of professionals working in Canadian magazine media. The Fellowship program was launched in 2016 to invest in the future of the magazine sector by supporting emerging journalists through a series of paid fellowships with Canadian magazines across the country.

Magazines Canada is happy to announce that our third annual Fellowship program will begin accepting applications for 2019 Fellows, as well as for magazines interested in hosting a Fellow, on January 14, 2019.

Magazines Canada is committed to equity and inclusion. We welcome applications to the 2019 Fellowship program from diverse Indigenous, cultural, linguistic and regional communities. Magazines Canada Fellowships are open to Canadian journalists, students and recent graduates, as well as international students studying in Canada.

There is no fee to apply for the Magazines Canada Fellowship program.

Visit magazinescanada.ca/program/fellowships for more information on eligibility criteria, the judging process, and how to apply.