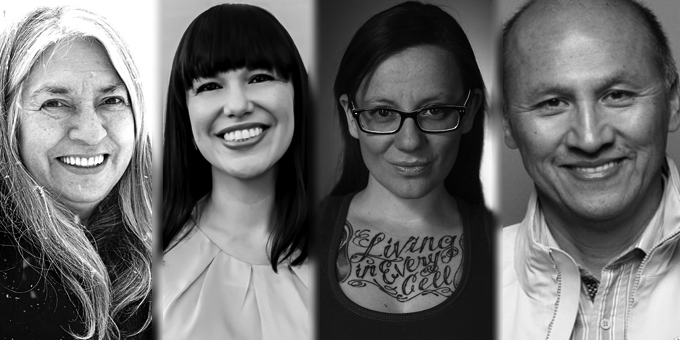 Has mainstream success changed the role of Indigenous writers within their communities? This event celebrates the rise of Indigenous storytelling and considers the opportunities and challenges faced by artists and writers as they bring their stories to mass audiences. In partnership with the Toronto Public Library as part of PEN Canada’s Ideas in Dialogue series.

Lisa Charleyboy is a First Nations writer living in Toronto. She has written for the Guardian, MSN Canada, CBC, Indian Country Today and THIS Magazine. She is the Editor-In-Chief of Urban Native Magazine, which focuses on pop culture with an Indigenous twist, and she is contributing arts editor for Spirit magazine.

Cherie Dimaline is a novelist. Her 2007 fiction debut Red Rooms won the Anskohk Fiction Book of the Year Award. She is editor of FNH Magazine, an Aboriginal student periodical; Muskrat Magazine, an online Indigenous publication; and FACE, a national print quarterly focused on food sovereignty and culture. Her short fiction has been anthologized internationally. Cherie’s novel The Girl Who Grew a Galaxy was published by Theytus Books in 2013.

Lee Maracle is a First Nations author and critic whose work combines poetry, fiction, non-fiction, myth and memoir to retell traditional Indigenous stories within modern contexts. Her work focuses on culture and history and the struggle of Indigenous communities against racism, sexism and economic dependency.

Gerald McMaster is a curator, author, artist and educator and a Canada Research Chair in Indigenous Visual Culture & Curatorial Practice at The Ontario College of Art and Design (OCAD) University. McMaster has curated collections at the Canadian Museum of Civilization, the Art Gallery of Ontario and the Smithsonian National Museum of the American Indian. In 2006 he was appointed Officer of the Order of Canada.

https://magazinescanada.ca/wp-content/uploads/2015/11/Untitled-2.png
Webinar: Making Money and Deepening Your Reader Connection with Digital Fundraising
As ad sales plummeted last spring, Inuit Art Quarterly ran a tight digital fundraising campaign that doubled its goal, pulling in more than $50,000 in two weeks. In this webinar on January 20, Alysa Procida and Britt Gallpen describe the magazine's business strategy, which focuses on converting readers into donors and deepening their commitment to Inuit art. Learn the secrets for donor engagement that propelled this award-winning magazine to success.
https://magazinescanada.ca/events/making-money-and-deepening-your-reader-connection-with-digital-fundraising/